There is a pattern of power use and renewable power production that is putting pressure on electric utilities.  When power demand is highest- through the evening and overnight hours to morning- renewable electrical production is often at its lowest.  Power demand, when plotted over a 24 hour period can look like the silhouette of a duck. The graph below from the U.S. Office of Energy Efficiency and Renewable Energy illustrates power demand in California on a single day (March 31st) over several years. In the example it is possible to see the deeper “belly” and steeper “neck” that is caused by increased deployment of solar power and increased electrical demand in the evening. March 31st has a particularly steep “neck” because air conditioning is not greatly demanded during that season and solar power production is high. So, why does a steep duck neck put pressure on electric utilities? The utilities have a difficult time ramping up so steeply to meet evening demand. Further, during some days it is even possible to have too much power (“over-generation”). 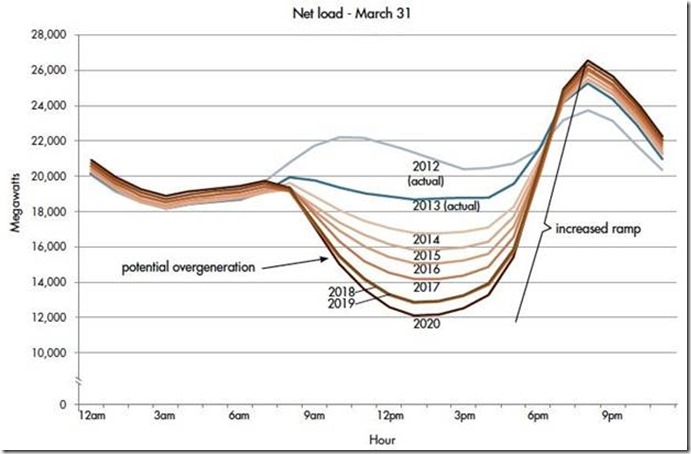 The duck curve at this time is most impactful in California and Hawaii because of their high percentage of renewable power generation. Solar power contributed 40% of Californian power generation on March 31, 2017.

Forty percent of Vermont power is now also produced with renewables. What is interesting about Vermont and other New England States is that despite the known grid challenges created by renewable power generation and increasing nightly power consumption, state energy policies and the electric utilities that work with state incentive programs seem to be encouraging behavior that will only exacerbate the duck curve problem.

Consider cold climate air source heat pumps. Many tout these heat pumps as a renewable energy source, which of course they are not. They are basically highly efficient reverse refrigerators. Heat pumps can add heat in the winter and add cooling in the summer. Heat pumps are electric power consumers. The colder the air is outside our homes, the more power that air source heat pumps use. Also, what most people don’t speak about is how much additional electrical demand will be created by air source heat pumps when those who previously had no air conditioning discover that a heat pump can also cool homes. Cold climate heat pumps promise to increase the duck curve whether in summer or winter. However, given reduced solar power production in winter the impact on the duck curve should be greater during cold months.

Advanced wood heat is a solution for the duck curve in the Northeast U.S. because wood heat is available any time of day. We tend to overlook the elegance of trees as solar storage. When burned in advanced wood boilers, decades of stored solar energy are released in a chemical conversion process that releases 80% or more of that stored energy into heat. By deploying advanced wood heat instead of heat pumps, States would not only flatten the duck’s head, but reduce total power consumption and offset the use of other fossil fuels such as gas and oil.

Particularly in Vermont, which has been presented with a carbon tax plan called The ESSEX Plan (an Economy Strengthening Strategic Energy Exchange), the potential for exacerbating the duck curve has not been well addressed. The Essex Plan proposes to tax common fossil fuels such as gasoline, diesel, heating fuel, and propane and to use the tax income to lower electric rates, help with weatherization programs, encourage electric vehicles, and fund rebates through Green Mountain Power’s Energy Assistance Program. Here is the problem: The ESSEX plan is completely electric power-centric. It seeks to encourage more heat pumps, more electric vehicles, and more conservation. These are reasonable goals, but why not encourage more biomass? Funds generated through the carbon tax should incentivize all forms of renewable energy.

It is amazing how much focus is put on renewable power and electric heat when advanced wood heat is being deployed now and helps solve several problems created by power-centric planning, such as the duck curve. Nature’s solar battery is in ample supply. We know how to use it efficiently and in a way that supports not only the wealthy but also low income and rural populations. In fact, utilizing wood is an excellent tool for helping rural economics. Not only does wood harvest and processing produce jobs, but it increases land values and funds rural land owners through timbers sales. Let’s not forget all of the benefits of advanced wood heat.