When it comes to wood boiler efficiency, too many are "high efficiency" boilers.  How could practically all wood boilers be considered highly efficient?  Is the term meaningless?  Even informed buyers must find the landscape very confusing.  One might think that a government website could help solve the confusion.  However, even the EPA site listing approved wood boilers does not make clear which products will be the most efficient in actual use.  What is going on?

Firewood, the Natural Fuel, is Difficult to Test

Wood and wood pellet boilers present unique challenges for establishing efficiency ratings  primarily due to the unique nature of wood fuels.  Firewood exists in various shapes, species, and moisture contents.   Wood fuel changes states as it burns; going from a drying phase, to a smoking phase, to a smoke ignition phase, to a charcoal burning phase.  Each species of wood passes through these stages a little differently.  Further, wood fuels do not ignite or extinguish quickly.  Even wood pellets, which are highly processed, can have various moisture contents, pellet fragment size, and fuel value.  For example, pellets made with softwood, counter-intuitively have more energy value than pellets made with hardwood due to the resinous pitch that is pressed into the pellet.

To help compensate for the variability of firewood and resulting impacts on wood boiler efficiency during testing, most US test methods limit allowable wood species.  Due to wide geographic distribution, red or white oak test fuel is accepted throughout the US.  Side note: To be compliant in Washington State, Douglas Fir must be used.  Washington State firewood markets are dominated by pine, spruce, and fir.  Attempting to further reduce testing variability, until recently, all tests for firewood boilers required the wood to be cut into lumber with cross sections of 4" x 4".

The length of each 4" x 4" fuel stick is determined by a formula based on the depth of the firebox.  After being cut to length, the wood is then nailed together with 3/4" spacers forming a test "crib".  The crib of wood is basically a manufactured fuel pile nailed together with spacing in a neat, geometric pattern.  Of course, that is not a realistic way to fire a wood boiler, so in addition to crib wood based testing, there are now at least two tests that allow for natural firewood to be used. 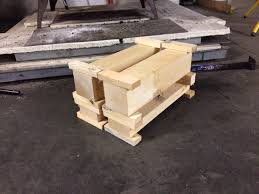 Regardless of attempts to improve wood boiler efficiency, human operation of wood fueled boilers is always a factor.  For example, frequent on/off cycling of a boiler run when in shoulder seasons or a boiler filled with green wood or garbage can create terrible smoke and low efficiency.   US regulators responding to air pollution problems, have become increasingly interested in the performance of wood fueled boilers operating in less than ideal aka. "average" scenarios.  As a result, multiple test methods for wood fueled boilers now exist.  This has had the unfortunate effect of allowing little comparability between boiler models tested with different methods.

Driven by the states and EPA, in 2015 the US transitioned at the federal level from having zero mandatory testing to a requirement that all residential, wood fueled boilers be EPA certified to be legal for sale.  Given the small pool of wood fueled residential boilers with any testing at all and given the high cost of testing in 2015, regulators accepted many existing results from the various test methods including the European test method.   After 2020, boilers formerly approved with European test results required re-testing. While the primary goal of new tests is to reduce emissions from wood boilers, wood boiler efficiency is also a target value.

Why was European testing accepted by US EPA and other US regulators?  Prior to 2015 and the advent of EPA certification, several states offered financial incentives for their citizens to install advanced wood fueled boilers.  The incentives were created to encourage meeting renewable energy mandates and to help replace existing, dirtier and less efficient technology.  A large percentage of advanced, wood fueled boilers eligible for incentives in 2015 were European.  Due to the prevalence of European boilers, European test results were accepted prior EPA's involvement.  New York State led the way by accepting European test results for their Renewable Heat New York program.  Other states followed suit.  European test data was converted to US units of measurement in an attempt to provide units that correspond with typical US test data.

The ability to convert test data from customary European units of measure to customary US units of measure doesn't result in true emission and efficiency comparisons.  There is minimal harmonization between test methods.  For instance, US tests require wood fueled boilers to be tested at four different burn rates, <15% of nominal output, <25% of nominal output, <50% of nominal output, and at 100% output.  Results of each test are then averaged using weighting, with 2/3 of weighting placed on the two lowest output tests, which is when boilers are typically operating most poorly.  The nominal output test receives only 5% weighting.  The weighting scheme is an attempt to demonstrate boiler operation in a typical scenario.

The Impact of Fuel Moisture Content on Calculating Efficiency Results

Further complicating test results, when it comes to efficiency, European efficiency is reported using the lower heating value (LHV) of wood fuel whereas in the United States, efficiency is reported based on the higher heating value (HHV) of wood fuel.  Here is a brief explanation of the difference between HHV and LHV and how heating values impact reported efficiency:  When any fuel is burned, depending upon the moisture content and quantity of hydrogen in the fuel, there will be a release of water, typically in the form of steam, most of which is lost in the exhaust.  The conversion of water to steam requires energy.  For the HHV of fuel, the energy "held" in the steam is accounted for and added to the fuel value.  If the exhaust can be condensed and the heat in the steam re-captured, then HHV makes perfect sense.  Stated slightly differently, HHV is a measure of all available energy in the fuel assuming that heat in converted steam can be recaptured.  Using the LHV of a fuel does not account for energy used/lost to produce steam.   Consequently, if boiler efficiency is based on the amount of energy put into the boiler versus the amount of energy output, using the HHV of a fuel will result in a lower efficiency rating.

In practice, that means that boilers tested using the HHV of wood fuel, as we do in the United States, generally have substantially lower reported wood boiler efficiency than boilers tested in Europe purely as a result of how the efficiency rating is calculated.  For example, a boiler tested in Europe with a 92% efficiency rating LHV will have an 82% efficiency HHV rating based on 25% moisture content fuel.   As test fuel moisture content increases, the disparity between HHV efficiency and LHV efficiency increases. Those results will be very different even before the impacts of disparate burn rate categories mentioned above are added to the equation.  Remember too, that these two efficiency ratings  are for the same boiler and do not change how much heat is converted from wood fuel to heat in your house, or how many emissions will be produced in normal, everyday use.

Given all of these factors, when reviewing wood boiler efficiency it is important to recognize the following:

The ongoing evolution of wood fueled boiler testing appears to have no finish line.  With the Integrated Duty Cycle test method as one example, there are efforts in the US to develop tests which will be indicative of wood fueled boiler performance during on/off cycling.  Some agencies in Europe are also discussing tests more like American tests.   While it is helpful to have a single efficiency rating such as the AFUE rating found on oil and gas boilers, when it comes to wood fueled boilers, it seems that US consumers, policy makers, and regulators are likley to face multiple efficiency ratings and ample confusion for several years to come.