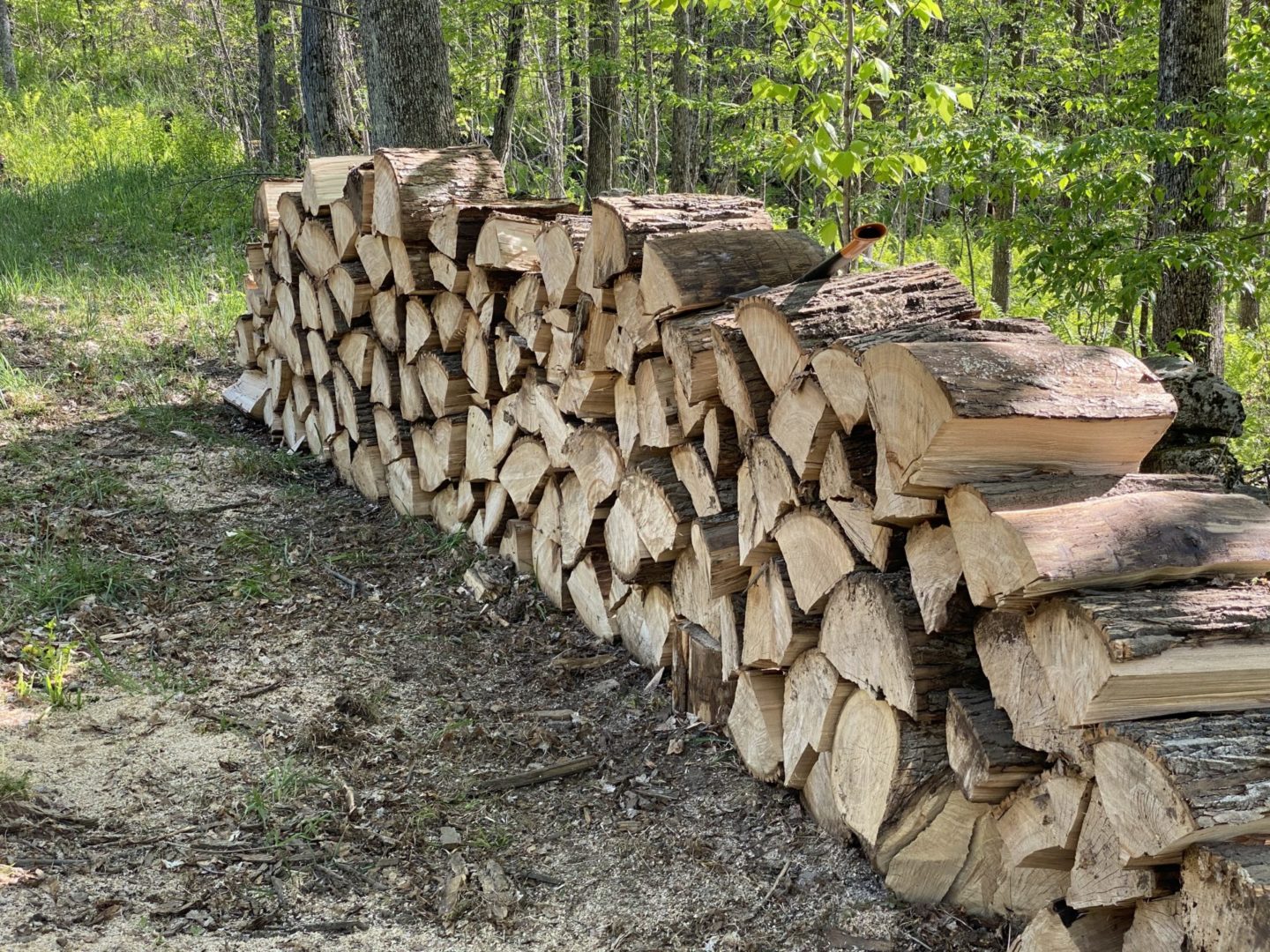 From the back windows at home we look to the west, down over the leach field, back lawn, and past the vegetable garden, then over a small field to a stone wall and tree line that runs parallel to the back of our house.  Another stone wall intersects the first wall at a 90-degree angle and forms our southern border. 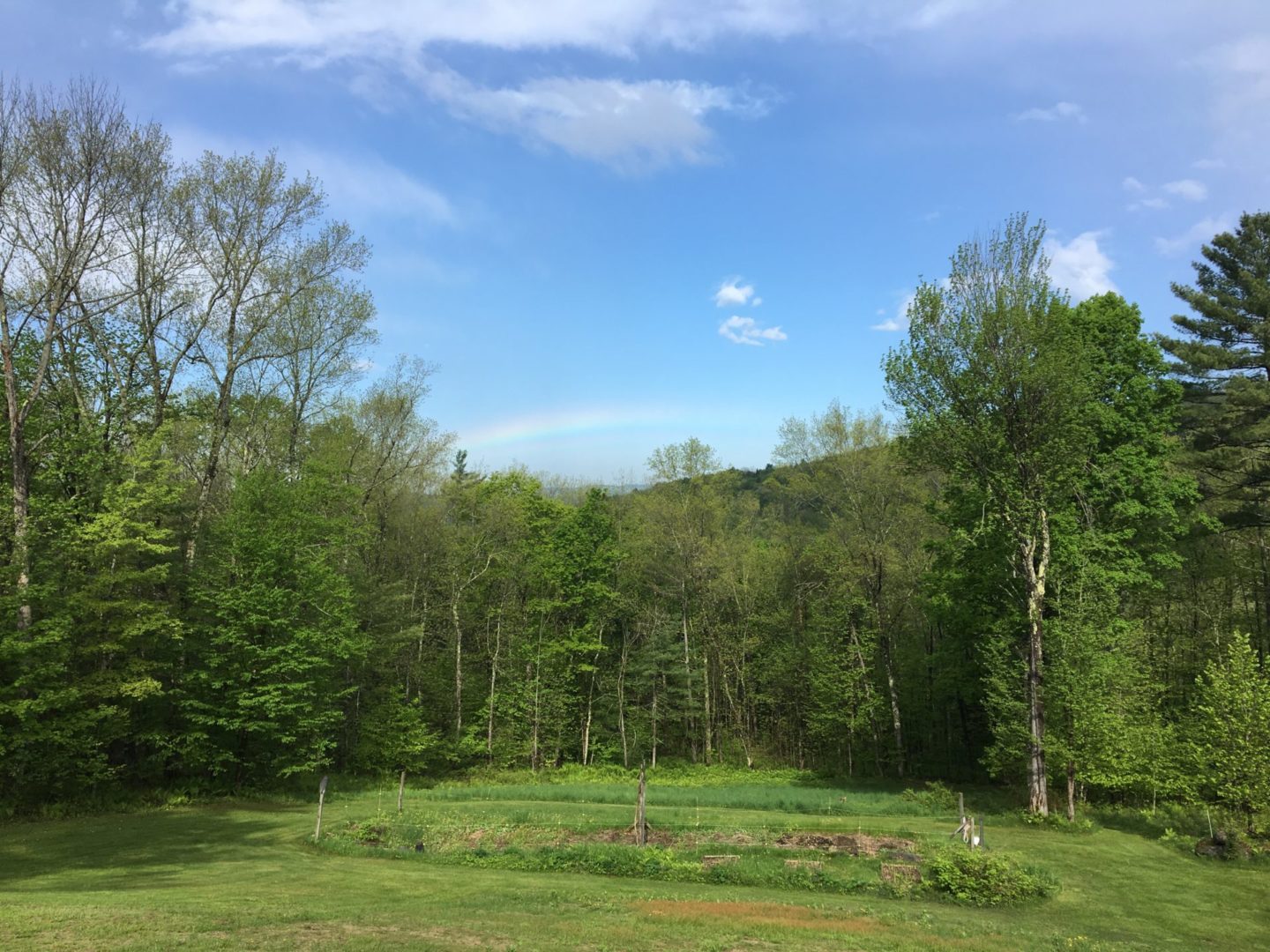 About five years ago a large, white ash tree growing at the intersection of the two walls snapped at its rotten base and toppled over in a wind storm.  It looked terrible.  Partially because the tree was on our property line and partially because it fell onto our neighbor's land it was not easy to convince myself to turn it into firewood for the Fröling wood boiler.  Our neighbors aren't the sort to wield a chainsaw and they couldn't see the giant, ugly hulk from their place.  On the other hand, we could see the ugly tree and I did (as firewood like the Coyote imaging the Road Runner as a roast), every day.   Yet, the toppled ash remained, driving me crazy, hanging twelve feet off the ground, it's top tangled in the adjacent trees.

Perhaps it was the changing of the seasons, perhaps it was that I was cutting other winter logs into firewood, but for whatever reason, I decided that the tree could stay there no longer.  The first challenge was working around barbed wire and sheep fence that had been strung between trees along the property line almost 100 years ago.  There was also enough mud to have some concern about getting the tractor stuck.  Though, the biggest challenge was getting the ash low enough to the ground so that cutting on it would not release a roll that would crush me.  Even after 5 years, there remained incalculable tensions that were created when the old beast fell.  Using the chainsaw sparingly and using the tractor winch to coax the reluctant tree to a safer working level, it finally, reluctantly relaxed to thigh height.

It was gratifying to drag the last log from the tangle without injury to self, equipment, and importantly, my neighbors' trees.  Between the mud and potential injury to other trees, recovering the limbs was a bridge too far.   The limbs were now on the ground, safe, out of my sight, and ready to become tomorrow's trees.  The enormous logs winched through the already-toppled stone wall like battering rams.  After a little wall repair and tremendous appreciation for the stone stacking farmers of yesteryear,  I began cutting the logs into rounds. 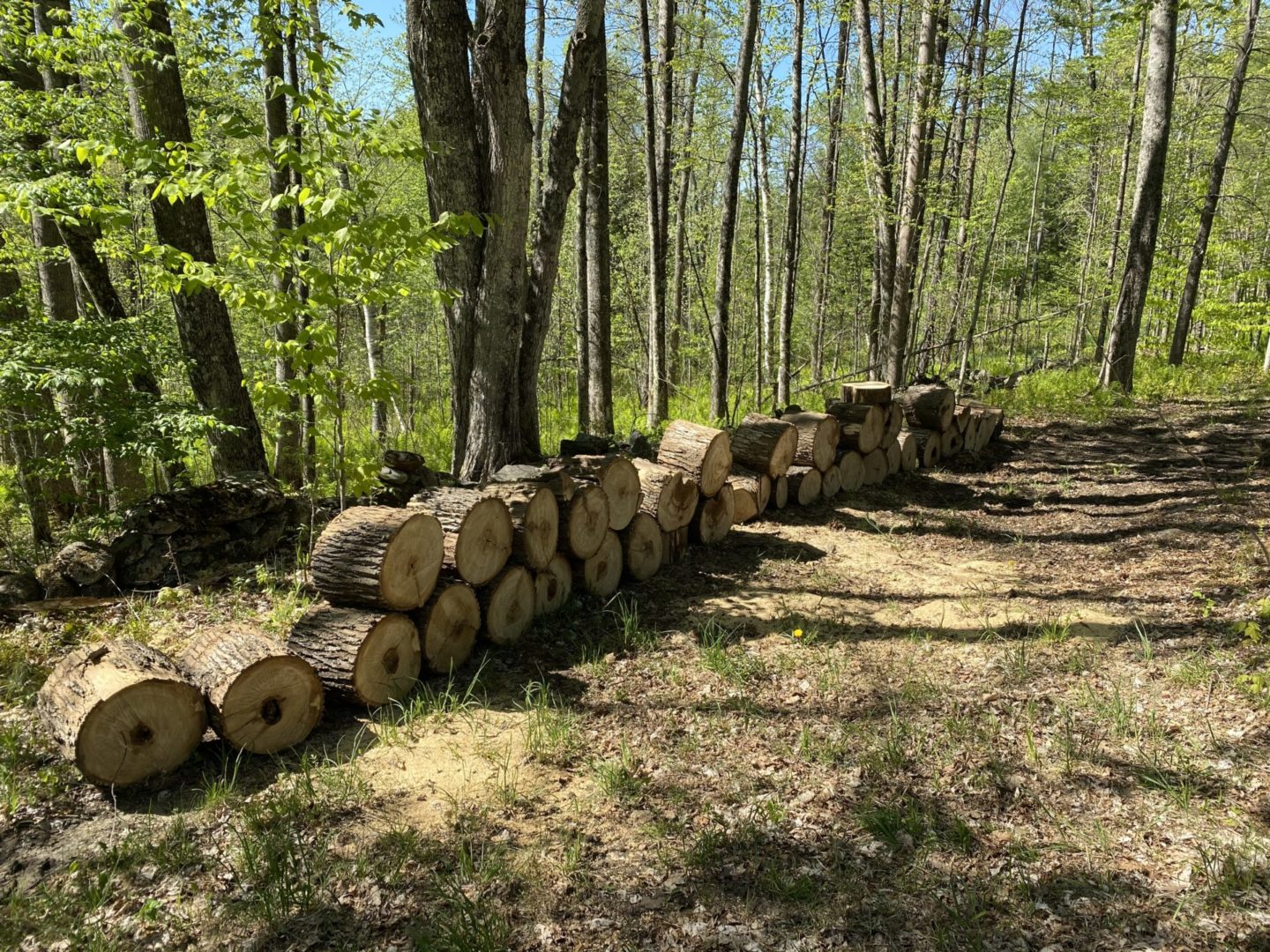 There were four logs, each about 15' long and about 24" in diameter.  The wood was mostly sound except near the base where the tree had snapped.  All four logs had a dark seam that ran the entire log length, growing to a small hollow toward the butt.   What was unusual is that cutting each and every round released a small fountain of carpenter ants from the dark seam.  This log was the largest carpenter ant colony, both by volume of ants and by the physical size of the colony I have ever cut into. 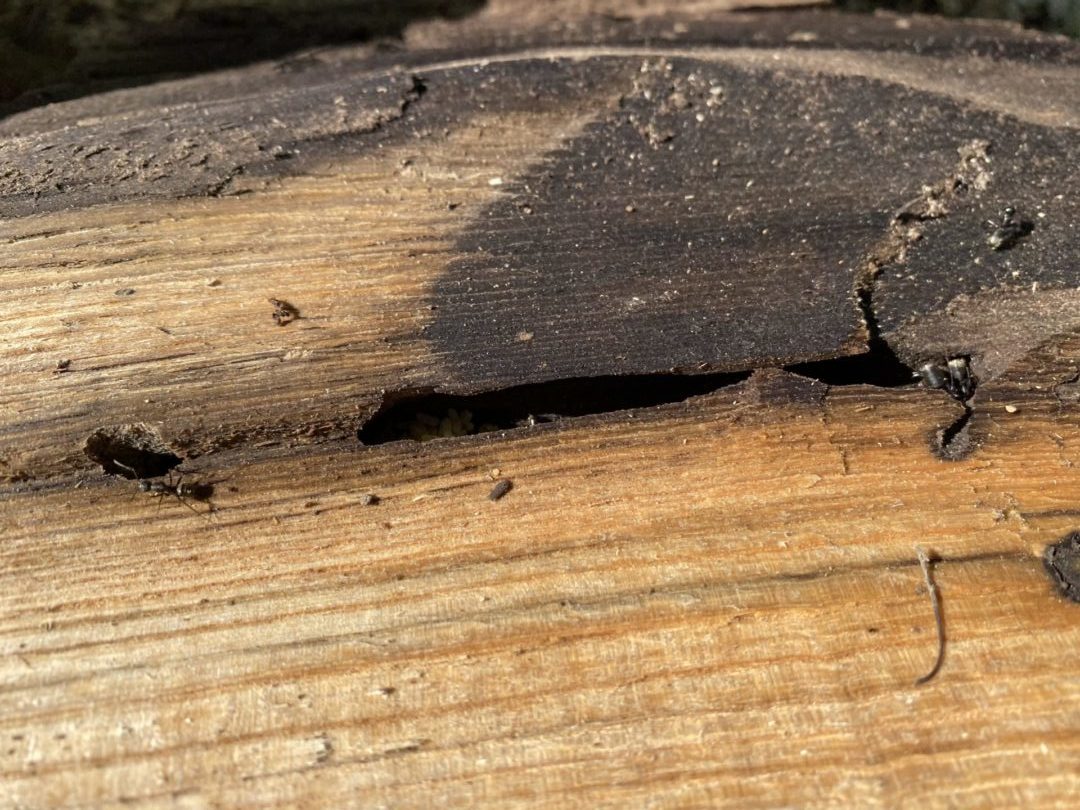 The rounds were too heavy to lift safely onto a splitter.  Given how easily ash splits, I decided to quarter the rounds on the ground and stack them to let them dry before splitting them later with the Super Split.  To deal with the massive ant colony, I split each piece until there was no remaining hidden seam for the ants to stay in. 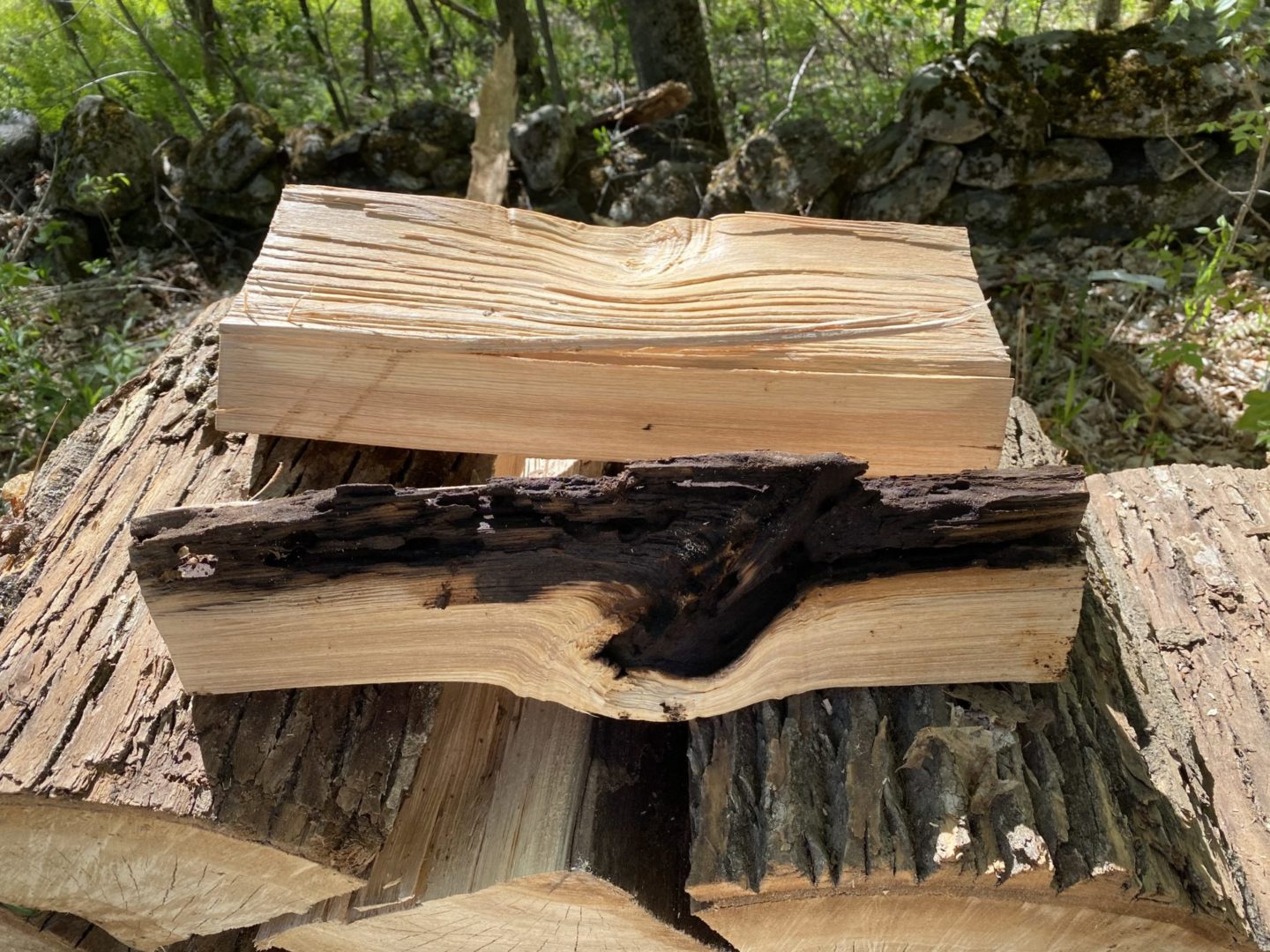 Here are two splits, formerly one piece. One split is ant-free, the other potentially harbors ants and is difficult to split further. The piece with dark wood will be discarded.

I pitched any remaining piece that was difficult to split or which could not be guaranteed not to contain hidden ants back into the woods.  The discarded chunks of ant-infested wood represented a couple of days of lost fuel, but nothing significant.  Using poison to eradicate the ants or trying to bring ant-infested wood to my woodshed are far less attractive options.  Besides, the ants did nothing to harm me.  Perhaps they will re-colonize among the castaway remains of their home. 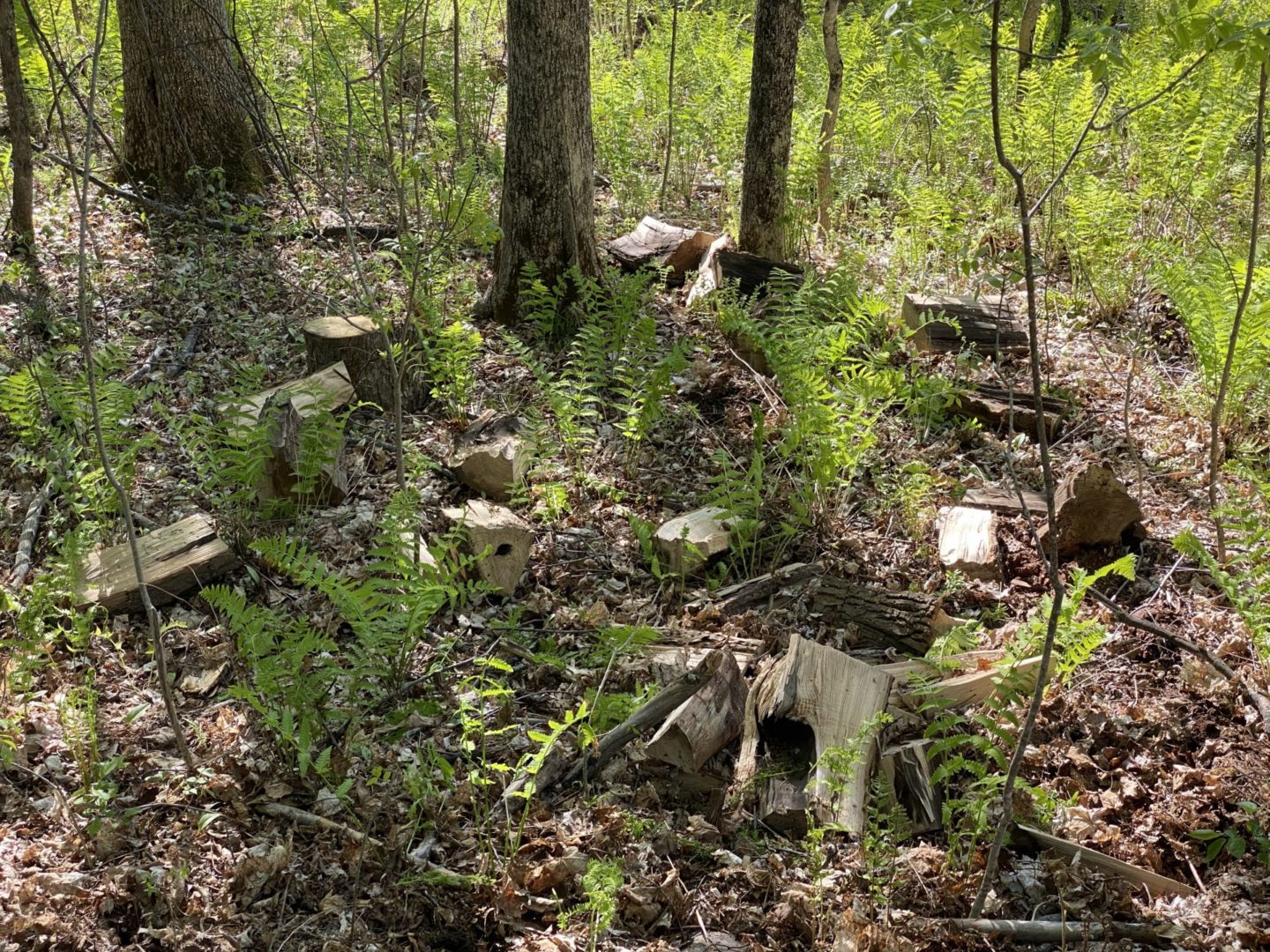 My view is no longer annoying, and I have another 3/4 cord of perfect, ant, and rot free wood.  It splits like a dream and will be perfect for the winter of 2021/2022.