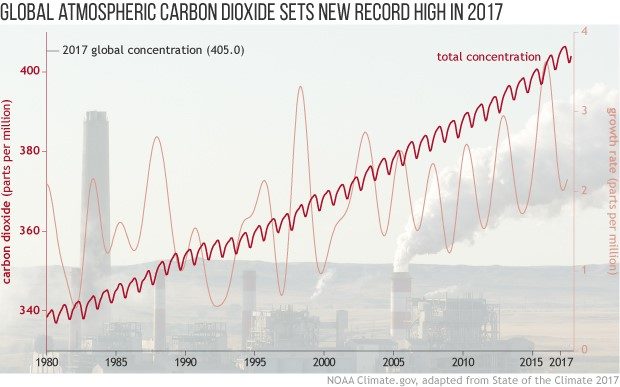 Using wood for heating is not only smart carbon policy, but should also become an essential component of pro-forestation land management.

Some believe the countdown timer on a 10 year planetary climate time bomb has begun.  They believe we have ten years to figure out how to clip the carbon "wires" or human-induced carbon emissions will irreversibly change our planet.  "Climate Emergency" yard signs are popping up all over the place in our region.

The problem with the climate emergency concept is that the emergency started decades ago and it will take decades to solve.  Not only is atmospheric carbon not declining, but it is increasing on a year over year basis.  As world population continues to increase and billions strive for the comforts that many Americans enjoy, reducing atmospheric carbon below 350 PPM (a widely adopted maximum acceptable atmospheric carbon dioxide concentration) does not appear possible anytime soon.

Climate emergency is a terrifying concept.  Unfortunately the concept has induced not only fear, but also hastily conceived theories about renewable energy.  That's not to say that concern about the climate is unfounded.  On the contrary, we should focus as much as is possible and reasonable on conservation and replacing fossil fuel technologies.  It is undeniable that the climate is being altered by humans in startling fashion.

Here in the wood heating world, we've been baffled by one new concept arising from the climate emergency movement.  The concept is this:  Wood heating is not only not carbon neutral, but wood heating is worse than burning oil.  We have actually witnessed several environmental activists claiming that people should continue to burn oil or gas rather than wood given climate concerns.

The argument goes like this:  Regardless of the fact that wood, unlike fossil fuels, contains carbon that is constantly circulating in our ecosystem (in human time rather than geologic time), wood emits more carbon at the point of combustion than fossil fuels.  After harvest, trees will require 40-100 years to grow back to recapture the emitted carbon.

Here's where the argument goes off the tracks:  Because we have only 10 years, not 40-100 years to reverse carbon dioxide concentrations, wood is no longer a sustainable fuel and trees should not be used as fuel.    Said more simply, a climate emergency caused by fossil fuels is making a renewable, carbon-beneficial fuel neither renewable nor carbon beneficial.

The concept that a climate emergency has reversed the benefits of wood burning is bizarre and wrong.  For example, wood that my grandfather burned to keep his family warm was carbon neutral 70 years ago, but because replacement trees may not have grown fully back since his era and we don't have time to wait, that somehow re-defines the carbon benefits of the wood he burned.  Likewise, wood I burn now may not be considered carbon neutral by the anti-wood heating crowd, but if we can get the climate emergency under control in 10 years, the wood I burn is somehow carbon beneficial again because we'll have all the time in the world for trees to re-grow to re-capture carbon.  Nothing about the wood or emissions from it changes from one century to the next.  Only our place in time changes.

As misguided environmentalists advise against wood heating, they often in the same breath say that pro-forestation (managing forests to contain more carbon) is necessary to stem carbon emissions.  They drive around  with "Our Forests Are Not Fuel" bumper stickers.  Yet, they sit in wooden chairs in wooden houses, using paper at desk and restroom.  Are our forests also not lumber and paper?  The point is that managing forests for pro-forestation, lumber and paper produces waste wood that can and should be used for heating.

Meanwhile, amongst the din of nonsensical opinions about the threats of wood burning,  we in the Northeast United States are losing 65 acres of forest per day due to agriculture and development because those uses are more valuable than keeping land forested.  Pro-forestation is nothing but a grand idea without a mechanism.  We have a mechanism for pro-forestation in the wood heating market including utilizing weed trees and waste wood from higher value wood processes such as lumber.  Using wood as a heating fuel therefore not only encourages keeping forests as forests, but also offsets carbon dioxide emissions from fossil fuels.  Burning wood sustainably will always be carbon beneficial.