All Solid fuel hot water boilers must be installed with an ability to shed heat with or without the benefit of electrical power.   In the unusual event a boiler exceeds its set-point temperature and the temperature is continuing to climb, an over-heat dump zone may be the only means for preventing the boiler from making steam.  Typically, over-heating events occur during power outages or during equipment failures such as circulator or control failure.  Over-drafting chimneys can also cause a fire to continue burning in a boiler that normally only burns with forced or induced draft.  Human error is another typical cause of over-heated solid fuel boilers.  For instance, forgetting to close a boiler door may eliminate all typical combustion controls.

Modern solid fuel boilers including down-drafting, gasifying, wood burning boilers are less prone to over-heating than older natural-draft style wood burning boilers, but even modern wood boilers can over-heat.  Installers often can claim that they have many years of experience with down-drafting boilers without seeing or hearing about an over-heating event.  This may lead to complacency.  However, over-heating is one of the scariest events that an owner of a solid fuel hot water boiler can face.  The production of steam in a hot water boiler is dangerous and is an uncontrolled event.  For those reasons, over-heating must be prevented even when it is never expected. 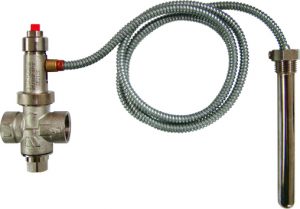 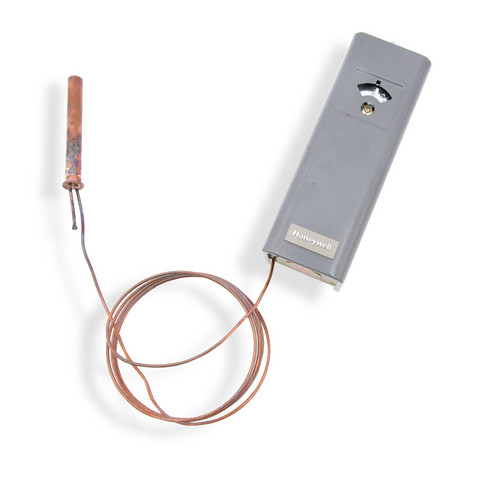 If there is an over-heating event and there is electric power, a temperature based switch, such as an aquastat starts a circulator on a designated heating load/zone of heat.  Heat flows to radiators and is dissipated to the air.  However, in the case of a modern home that utilizes PEX or rubber tubing, much of the plumbing may not able to handle water temperatures of 210°F or higher commonly seen in an over-heating boiler.  When existing zones are not temperature rated for dump zone use, a dedicated all metal dump zone can be added.  Regardless of the type of plumbing used in a home, having power gives installers the ability to accurately size a dump zone because flows can be easily calculated based on circulator ratings and the head loss of the loop.  Furthermore, with the use of circulators, dump zones can be located in convenient and effective locations that are not dependent upon gravity flow of over-heated water.

Over-heating during power outages is another matter.  During power outages circulators are no longer operational, likely leading to a loss of flow through the boiler.  Most modern boilers wood boilers have advanced combustion air controls in combination with an adequate volume of water within the boiler jacket to prevent the creation of steam during loss of power.  Heat from residual sources such as burning wood, hot refractory, and/or grates rarely causes over-heating.  However, if there is a long lasting heat source and no water flow to cool the boiler, the water in the boiler jacket may reach excessively high temperatures. 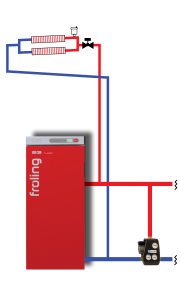 It is possible to prevent over-heating with gravity flow over-heat dump zones, but the employing these zones requires care.   Luckily, flow without the use of power is possible because hot water rises and cool water falls in pipes.  In a closed loop, the rising and falling of heated and cooled water sets up a constant current and steady flow.  Creating a loop that flows naturally and adequately to prevent over-heating requires care.  Here are a few essential ingredients:

Some of these eight points will be obvious, but installers make a few common errors.  In many cases baseboard fin tube is chosen as the dump zone radiator.  Installers often mount fin tube under the floor joists in the basement or at the top of a wall near the boiler.  It is an incorrect assumption that this fin tube will provide its normally rated output when installed against the ceiling. 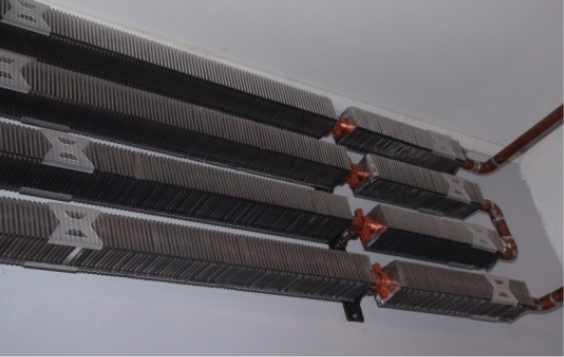 Baseboard radiators are often over-rated by 15% due to an antiqued rating that gave baseboard radiators a “premium” output over typically taller cast iron radiators because baseboard radiators are located closer to the floor where air is cooler.  With cooler air flowing through a radiator, a larger temperature differential between the air and hot water increases heat transfer.  This rating is noted in I=B=R ratings in baseboard literature.  One should divide baseboard ratings by 1.15 because the premium factor is not actually laboratory proven.

Secondly, when fin tube is installed close to the ceiling it also loses its ability to dissipate heat because it does not have floor level, low temperature air moving through the fins.  Contrary to their names, baseboard radiators are actually baseboard convectors and rely on air movement from bottom to top in order to output thermal energy.  I=B=R baseboard output ratings are usually made based on 215°F steam and an ambient room temperature of 65° F.  A factor of .69 is applied to reduce the output for hot water.  The factor is further enhanced by higher ambient temperatures as might be found at a radiator strapped to the ceiling in a boiler room.  Assuming 180° F water, but with a ceiling height temperature of 100°F rather than 65°F a factor of .41 is applied.  With 65°F ambient temperature the factor is .69.  Therefore, with elevated ceiling temperature, baseboard fin tube output is reduced by 41% compared to assumed floor ambient temperature of 65° F.  For comparison sake, this is almost the same reduction in output that you get with 140°F water in baseboard compared to 180°F.

Lastly, gravity based flow rates through fin tube will be unknown.  Compared to a zone with a powered circulator, a passive fin tube loop will usually have comparatively low flow, which reduces potential output further.  This factor is a relatively small factor compared to temperature.  For ½ gallon per minute flow the factor is .931 or about 93% of what output would be at 3 gallons per minute or more.

The other 7 "essential ingredients" are self explanatory, but of equal importance.  Luckily, modern wood burning boilers almost never over-heat.   The fruits of extra care for heat dump zones during installation may never be realized.  In what is an unfortunate paradox, because dump zones often remain unused for a lifetime, many installers will never know whether or not what they installed would have worked adequately if the boiler over-heated.  That is one reason that dump zones are poorly understood.  There are very few learning opportunities.  Ideally an existing zone of heat, normally circulated, of adequate size, well suited for temperatures over 180° F and located within the living space, but above the boiler will work best for a dump zone.  Dump zone design is as much an art as it is a science.  Almost every installation will be different.  Simply installing a length of ¾” baseboard fin tube and assuming that it will emit 550 Btu/ft. could lead to trouble.  Compared to the entire installation, a dump zone is relatively inexpensive and might never be used, but should always be carefully designed and implemented.