The house is a two-story 4,800 (total) square foot log structure built by its owners several decades ago. The roof is supported by scissor trusses, which create vaulted ceilings and a small attic space above the ceilings. Originally, there were two boilers providing the heat, a Frank's Wood Boiler and a separate oil boiler, both tied into baseboard hot water heat. Both boilers were replaced and substantial building envelope improvements were made.  The owners chose to dramatically reduce fossil fuel heat while at the same time improving their energy costs, comfort, and safety as much as possible. This post describes the process and results.

The project started with a call to Ed Whitaker at Green Thermal Systems www.greenthermalvt.com.  Ed smartly advised an energy audit before any heating upgrades began.  An energy audit that was coordinated through Efficiency Vermont www.efficiencyvt.com. After the energy audit was performed by Adam Barrett, New England Foam and Coating www.newenglandfoamandcoating.com was hired to insulate the attic and box sills.

Box sills were spray foamed. Removing fiberglass insulation from the attic was the next step. Thinking about air quality, the owners were keen to remove fiberglass batting that was compromised and soiled from 25 years of mouse intrusion.  After removing the fiberglass, truss bays were vacuumed and foam was then sprayed to a depth of 2-3" on top of the ceiling, along the bottom chord of the scissor trusses. Using spray foam in the roof served three purposes. The foam not only added insulation itself but also provided a vapor barrier for the 13" insulation that was blown in on top of the foam. The foam also provided an air barrier, which dramatically reduced the chimney effect within the home. The Chimney effect describes warm air escaping from the top of a home while at the same time pulling cold air in through cracks lower in the home. Just as a boiler sends hot exhaust up a chimney while cooler combustion air enters the boiler combustion chamber, a house can lose loads of heat due to the chimney effect. The Chimney effect also can pull gobs of unwanted cold air into a home, making rooms feel cold and drafty. 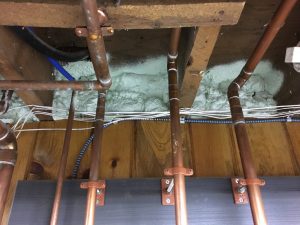 Interestingly, there was another counterintuitive alteration of the building envelope. The home had an unheated, air-locked entry space inside the main door on the bottom level. Because this space was cold and located inside the rectangular footprint of the home, cold air was exposed to the home through two extra walls and a ceiling. Rather than trying to add more insulation and air sealing in the existing interior walls, the exterior door was replaced and the airlock was removed so that the entire heated space was exposed to a single, exterior wall. Doing so reduced leak points as well as the square area of exposed walls. 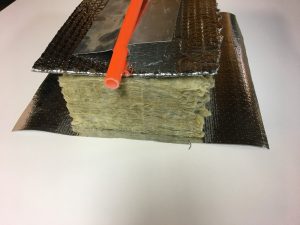 Along with improvements to the building envelope, the heating system received major modernization upgrades with expert advice and control strategy planned by Ed Whitaker.  Paul Cornell of East Burke, VT did the actual piping.  Under-floor radiant tubing was installed throughout most of the home. A primary goal was to provide low-temperature heat distribution. Low-temperature distribution allows greater utilization of most heat sources, in this case, water to air heat pumps, a wood boiler, and a condensing propane boiler. Three out of four heating zones were converted to radiant floor heat. Radiant tubing was stapled under the sub-floor. Aluminum heat transfer plates were attached to the tubing and the sub-floor. Foil-faced bubble wrap was placed 2" below the tubing, then a 3" layer of rock wool, followed by a reflective plastic barrier. 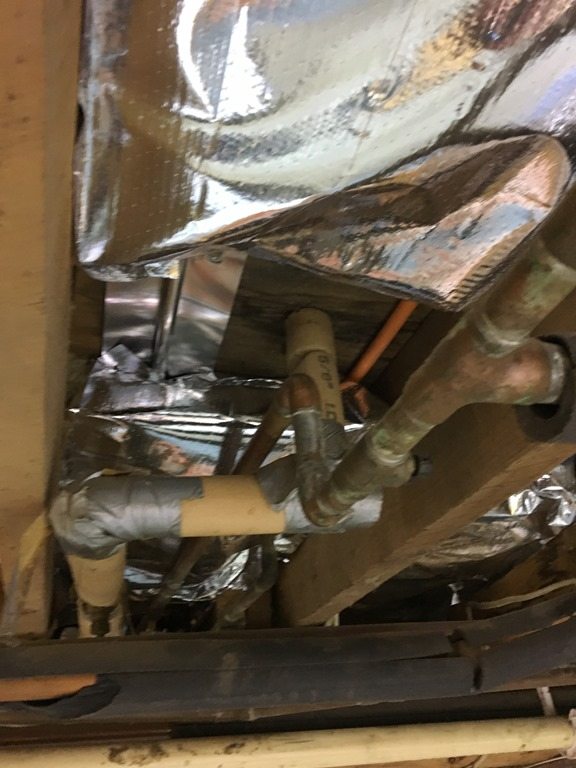 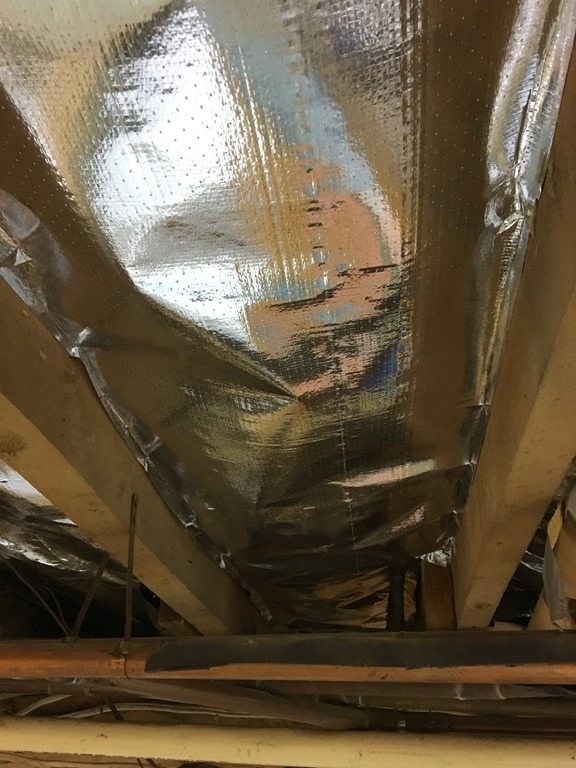 The home was already heated with a Solo Plus 60 wood boiler from Tarm Biomass. More information on the discontinued Solo Plus wood boiler can be found here. 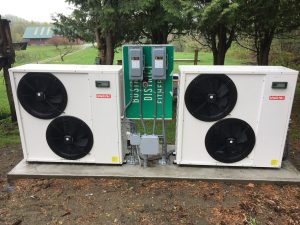 The tanks also allowed the homeowners to produce heat with their new SpacePak water to air heat pumps during relatively warmer, off-peak hours.

The heat pumps are only allowed to operate if the thermal storage drops below 130 degrees Fahrenheit (F). The radiant floor tubing provides adequate heat with 110 degrees F water during the coldest periods.

We encourage the owners to replace their manual tempering valves with active mixing valves, such as the Smart Comfort by LK Armatur www.store.tarmusa.com. These mixing valves and controls will set radiant floor temperature according to outdoor and room temperature.

Excess heat made by the heat pumps is stored in the 900 gallons of water for use in the radiant floors after the sun sets and temperatures drop. Using their heat pumps in off-peak hours makes it more likely that power being produced by the on-site 13.5 kW Solaflect www.solaflect.com photovoltaic arrays will be used directly on-site, saves the homeowners money by not using power during high demand periods, and reduces pressure on the power grid when the grid is receiving its highest demand. From the standpoint of incentivizing heat pump use, using air to water heat pumps and thermal storage makes a lot of sense.

A backup condensing boiler was installed as well. The owner confided that at his age, he wanted to make sure that should he be stricken with illness or injury, he would have a conventional means for heating his home regardless of outdoor temperature. Maybe he'll be willing to consider a new Fröling pellet boiler to replace his wood boiler if that day comes.

2.5 Cords = Amount of wood burned after thermal storage and heat pumps are added in December 2017.

? = power production and consumption have not yet been tallied.