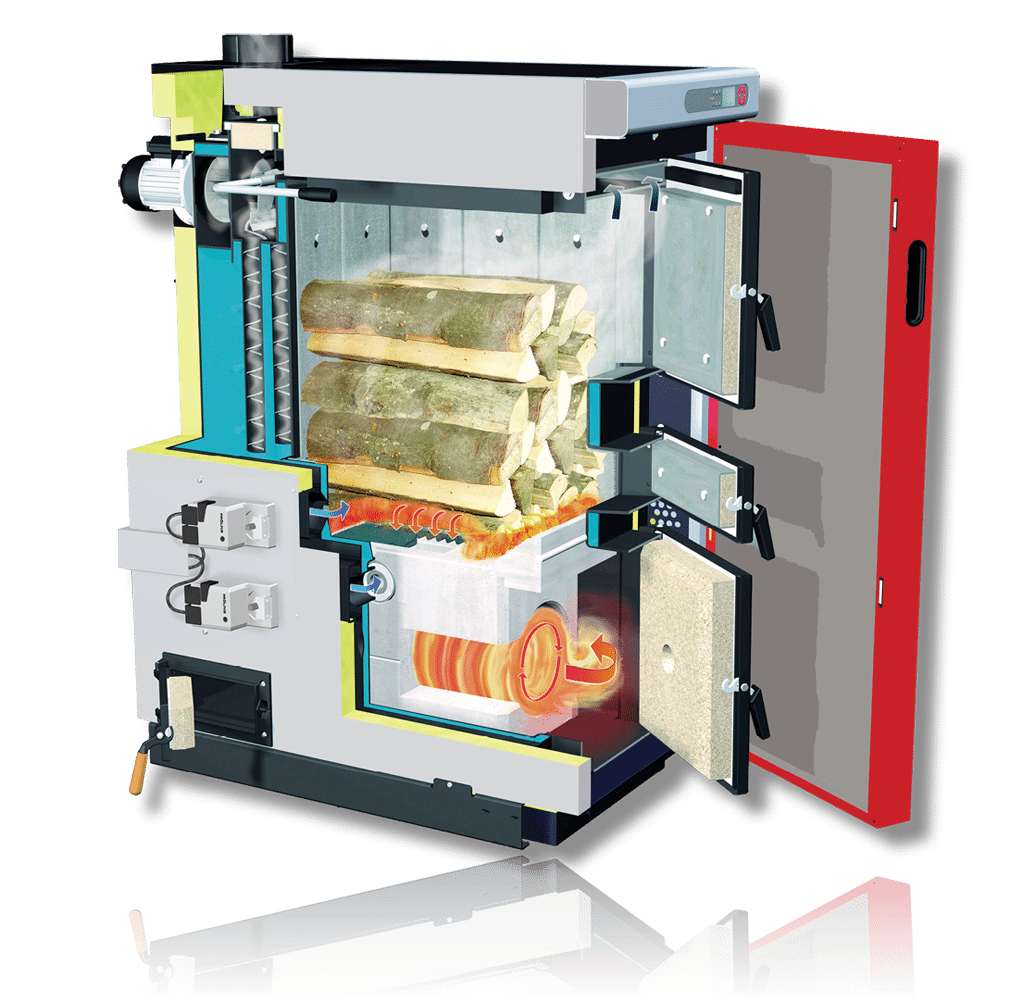 A Box of Water with Fire Inside

Wood boilers control fire.  It's an old story.  The ancient people discovered fire.  Hairy the caveman rubbed two sticks together and made an ember.  Hairy controlled his fire by adding the right size wood at the right time.

Modern people didn't like caves or living outside, so they figured out how to put fire in a box.  With their fire all boxed up, modern people brought fire indoors.  Modern people kept heat from the box inside and made the smoke go outside.  Fire in a box allowed for both fuel AND air control.

Air control was great, but there remained huge potential.  Sometime in the 1800s, a bright thinker added a bigger box around the box of fire and filled the space between with water.  A boiler was born.

The Era of Fuel Development

Let's jump forward to the 1900s.  The 1900s was a century of fuel development.  Early twentieth century land was wood poor due to excessive land clearing.  In New England, sheep farming led to landscapes that are unrecognizable as the tree covered landscapes of today.  Modern man needed other types of fuel.  The industrial revolution helped foster change.  Transportation, processing, and automatic stokers were some of the industrial capabilities that helped coal to become more popular.  Coal was condensed energy that could be broken into small pieces, stored more easily than wood, and could be automatically fed to the fire.  As good as coal seemed as a heating fuel, it was soon replaced by heating oil.  Oil flowed.  Oil burned cleaner than wood.  While there was plenty of evolution in coal and oil boilers, there was very little wood boiler development until the late 1900s.  Many a modern man thought wood was for cavemen.  Heating fuel popularity is subject to government policy, war, marketing, stock markets, and availability and a host of less important factors.  It's no wonder fuel markets are volatile.

The Revitalization of Wood Boilers

The 1970s oil embargo upset modern Americans.  Combining the embargo with heightened environmental awareness created a marriage of wood burning possibilities.  Smart people began tinkering.  A box of water with fire inside was, and happens to remain, putty to pyromaniacs.  Professor Richard Hill of the University of Maine, Orono, had funding from the U.S. Department of Energy and took a novel approach.  Professor Hill, building on the concept of a masonry heater, sometimes called a kachelofen, created a revolutionary design.  The kachelofen uses thick bricks to obtain high temperatures in the combustion chamber.  Professor Hill's design was:

Here it is possible to see a drawing of the design. 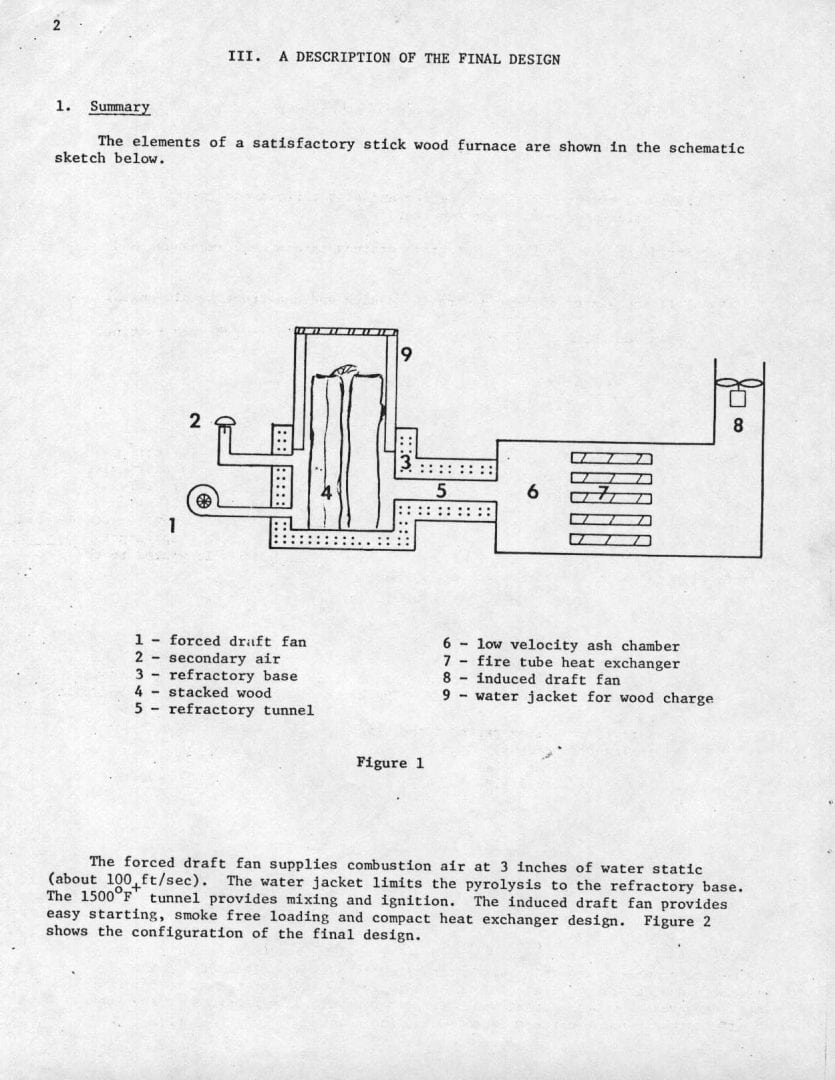 Other 1970s developments were important, but a bit less scientific:

There were more signs of intelligent design in the 1980s.  Essex Thermodynamics and Eshland both made down-drafting wood boilers that looked very much like today's gasification wood boilers.  The boilers used fans to move air downward through the base of the firebox and into a secondary chamber, where smoke was burned.  Garn also began building boilers sharing many of the concepts of Professor Hill's boiler.  Garn is still in business making boilers very similar to early eighties Garn boilers.  Garn boilers burn horizontally with a long flame path in ceramic refractory.  Where Professor Hill's boiler utilized an independent thermal storage tank, Garn encases the combustion chamber in a large tank of water.  Garn wood boilers were and remain shaped like locomotive engines.

Despite advancement on some fronts, many 1980s boilers continued to utilize a rectangular firebox with cast iron grates in the bottom and some sort of basic air control.  Durability was easier to understand than combustion.  Many boilers of that era were built to last for decades.  Many continue to operate 30 years later.  The 30 and 40 year olds of the 70s and 80s are now approaching the 70s and 80s themselves.  They're not about to invest in a new wood boiler.  There aren't many products in our lives that work as hard as wood boilers and last an entire adulthood.

A New Species is Born

Strangely, during this same time, there was an evolutionary split in wood boiler technology.  As many indoor wood boilers saw incremental and continuous improvement, an entirely new concept involved taking the box of fire back outdoors.  Outdoor wood boilers (OWB) gained notoriety.

As the name implies, OWB are located outside of the building they heat.  OWB are self-contained, weather-tight and insulated.  The newfangled idea behind outdoor wood boilers was to economize appliance cost and wood preparation rather than to focus on combustion technology.  Most OWB were nothing other than a barrel with water around it built into a steel garden shed.  As the fire burned and the water heated, a circulator moved hot water underground through insulated pipes to the heated space.  Short chimneys and outdoor location eliminated chimney fire hazards, thermal hazards, and moved the burner closer to the wood supply.  Placing the fire back outside along with spurious advertising and marketing virtually ensured the burning of cold, green wood, refuse, and whatever else could catch fire. Unfortunately, attempting to economize wood handling with little regard for efficiency resulted in two to three times the wood consumption of indoor wood boilers.  Representing a serious regression for modern man, OWB soon became public enemy number one with air regulators.  Outdoor wood boilers did not burn cleanly. 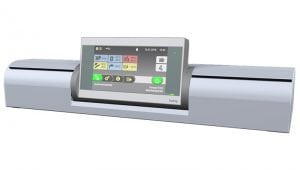 In the late 1990s and early 2000s wood boilers were being integrated with microcircuit control technology.  Along with oxygen sensors, microcircuits enabled precise control of combustion based on actual burning conditions.  This is often called Lambda Control.  Computer modeling enabled more precise air and combustion chamber design.  As with so many aspects of our lives, wood burning, one of the most elemental forms of energy production for the human race from the beginning of time was computerized.

There have been a host of other design improvements:

The Froling S3 wood boiler is a good example of a modern wood boiler: 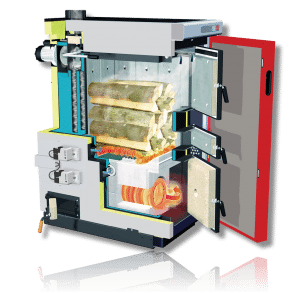 Since 2015, the United States Environmental Protection Agency is regulating wood boilers.  EPA has a special name, "hydronic heaters" for indoor and outdoor wood boilers.  Smoke emission limits for all types of hydronic heaters are strict.  The visible portion of most wood smoke consists of tiny droplets of tar.  Today, wood boilers must burn nearly all available fuel in the smoke.  When a wood boiler passes the EPA test, one knows that the tar is being burned in the fire box rather than allowing the tar to escape into the air.

It will be interesting what advancements we'll see in the coming years.  Rest assured that wood boiler designers are constantly updating designs.  What is next?  We believe that advancements will be made primarily with emission reduction.  For instance, some companies are already selling wood chip boilers with built in electrostatic precipitators (electromagnetic smoke particle catchers).  Other possibilities:

What new features or capabilities would you like to see in wood boilers?